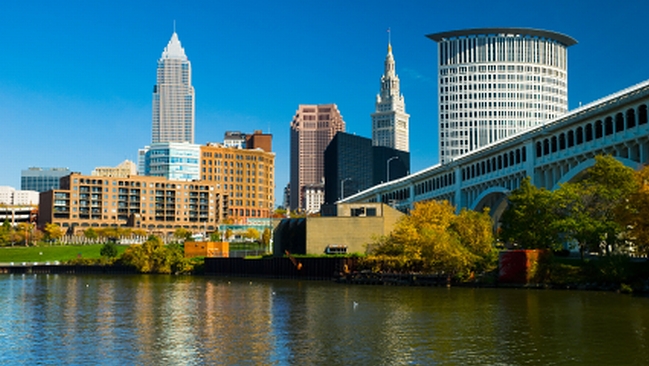 Cleveland, Ohio, is the country’s 14th largest city and sits on Lake Erie.  The city is known for the individual character of its diverse neighborhoods.  Cleveland is also home to internationally known cultural institutions and outstanding museums, including the Rock and Roll Hall of Fame, the Cleveland Museum of Art, Cleveland Orchestra, and Playhouse Center Square.  Cleveland has more golf courses per capital than any city in the country.  The city has been called “Comeback City”, due to the continued revitalization the city continues today.  Cleveland’s downtown is beautiful and clean with several great areas around the Cuyahoga River which includeTerminal Tower, the Flats, Warehouse District, East 4th neighborhood, and Playhouse Square .  Cleveland is still an industrial base city, but it has also grown in other fields including, finance, insurance, law, real estate development, and other professional fields.  There are four new sports complexes in Cleveland’s downtown, Progressive Field, for major league baseball, Quicken Loans Arena for the NBA Cavaliers, and the Cleveland Browns Stadium for the National Football League.

Where to Stay in Cleveland

For tops in Midwestern hospitality and charm the Ritz Carlton in Cleveland is elegant but relaxing. The hotel is Cleveland’s only four-star downtown hotel.  The hotel boasts wonderful views of the Cuyahoga River, downtown Cleveland, and Lake Erie and has indoor walkways to Tower City Center for dining, shopping, movies and Quicken Loans Arena.

To arrange your private jet charter flight to and from Cleveland, Ohio: