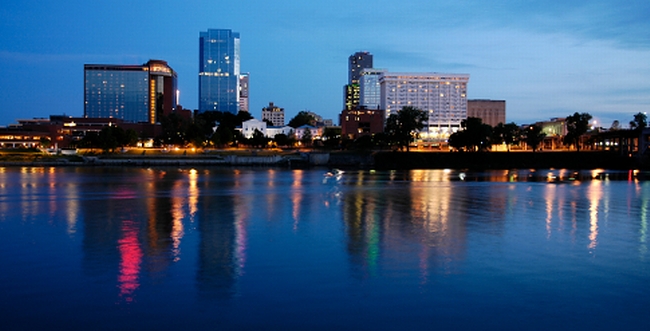 Little Rock is the state capital of Arkansas – the center for economic, cultural and governmental activities.  The city’s unique name comes from a small rock formation on the Arkansas River called la Petite Roche, which in French is “the little rock”.  Little Rock is a beautiful southern city filled with lovely neighborhoods, outstanding museums, outdoor activities, scenic parks, which attract visitors from all over the world.  The William J. Clinton Presidential Center and Park and the Arkansas State Capitol are both located in Little Rock.  Other attractions of note include the Heifer International Center Green Building, Willow Springs Water Park, Riverfront Park, Pinnacle Mountain State Park and the Arkansas River Trail.  The historic Quapaw Quarter is the well-known historic district of the city.  Most of the oldest buildings in the city are located within the boundaries of the MacArthur Park Historic District.  The Arkansas Arts Center holds one of the most important collections of works on paper in the USA and an outstanding collection of paintings by Degas, Monet and other great masters.  You won’t want to miss the Decorative Arts Museum.  Trapnall Hall is an antebellum home which can be toured by appointment. The Villa Marre is an elegant home from the Victorian era is open to the public daily. Little Rock visitors won’t want to miss a tour of the Clinton Presidential Library and Park, or the Old State House Museum, Historic Arkansas Museum.  You’ll also want to take in a show at the Arkansas Repertory Theatre and The Arkansas Symphony Orchestra or a Broadway Production at Robinson Auditorium.   The River Market District is filled with outstanding restaurants and a lively nightlife.

Where to Stay in Little Rock

The Peabody Little Rock is a Forbes Four Star hotel, oncedescribed as “Little Rock’s New Front Room”, by Governor Mike Huckabee, when the hotel opened back in 2002.  The hotel is located in the popular downtown River Market District.  The hotel is luxurious with lovely guest rooms and Capriccio Grill Italian Steakhouse.

To arrange your private jet charter flight to and from Little Rock, Arkansas: