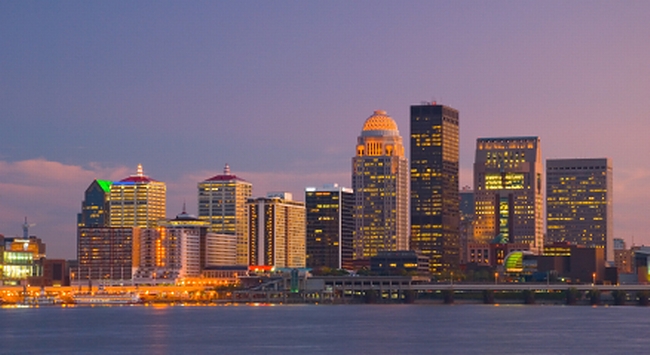 Newport Jets is a top private jet charter company serving Louisville, Kentucky.  Our team of Indianapolis private jet charter specialists are pros at scheduling and creating private jet travel flights in and out of Indianapolis. We are ready and waiting to provide first class local jet charter services to Louisville – and to create the perfect private, luxury travel experience.  We not only handle your flights but our professional concierge team can recommend wonderful places for you to stay in Louisville. We have a large selection of Louisville aircraft including the luxurious Gulfstream G550 to the Learjet 31; Newport Jets has just the right private jet aircraft for your travel to and from Louisville. Our charter jet team specializes in booking jet charter flights to and from Las Vegas, New York, Miami, and Los Angeles – and hundreds of other domestic and international locations.

Louisville:  A City On the Move

Located by the falls of the Ohio River, Louisville is Kentucky’s largest city. Louisville, Kentucky is a city on the move, with major city amenities like world-class performing arts, great sports and incredible dining.  The city of Louisville has been named America’s “Most Livable” large city by the U.S. Conference of Mayors. Visitors to the city will find great attestations and cultural experiences ranging from the “world’s most legendary racetrack,” Churchill Downs, to the Muhammad Ali Center and an eclectic mix of museums, art galleries and performing arts. Louisville is a City of Parks with one of the nation’s largest parks expansions underway, adding 4,000 new acres of park land and the 100-mile Louisville Loop trail encircling the entire community. When you visit Louisville you won’t want to miss the exciting 4th Street Live! entertainment complex downtown, Waterfront Park along the Ohio River and many historic neighborhoods. The Mellwood Arts and Entertainment Center, is located on 42 acres of land and has been renovated into a 360,000 square foot home to over 200 artist studios, specialty stores, galleries, teaching studios, office spaces, rehearsal spaces for theater groups, dancers and more.  MAEC has been host to many exciting Art Fairs, Film Festivals, Music Concerts and numerous other creative events.  At present there are over 200+ artists and artisans open throughout the center. The center also offers cafes, fitness, and three event rooms.  The Speed Art Museum is the leading visual arts venue in the state of Kentucky; the Speed offers a wide variety of experiences ranging from galleries of great art, and exciting special exhibitions. Baseball lovers of all ages will enjoy the Louisville Slugger Museum & Factory. One of the most famous attractions in Louisville is Churchill Downs, a thoroughbred racetrack, built in 1875, most famous for hosting the Kentucky Derby annually.

Where to Stay in Louisville

The 21C Museum Hotel was named Voted #1 Hotel in U.S. and #6 in World in Conde Nast Traveler’s Readers’ Choice Awards 2009, 21c Museum Hotel in Louisville, Kentucky is the first of its kind-a 90-room hotel dedicated to world-class luxuries, Southern-style hospitality and contemporary art from living artists. The hotel is located in the heart of Museum Row and downtown Louisville, 21c is an epicenter for culture, activity, and artistic expression.

To arrange your private jet charter flight to and from Louisville, Kentucky: