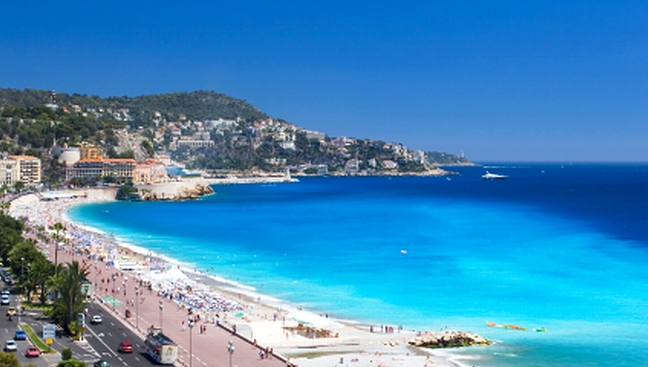 Newport Jets specializes in private jet charter service to Nice, France.  Our team ready to handle all your private jet charter plans to and from Nice.  We’re also happy to have our concierge staff recommend special spectacular places to stay,  in flight beverages, menus, and arrange for ground transportation in Nice.  We have a wide selection of private jet charter aircraft available for your trip , we can help you choose just the right plane for your trip.  The aircraft options are endless, including the Citation Ultra and the Global Express.  Our jet charter company has years of experience specializing in providing international charter jets to and from Nice, Paris, Cannes, Moscow, and Dubai, as well as hundreds of other international and domestic destinations.

Beautiful Nice, France, on the French Riviera has been popular for centuries.  Known for its beautiful coastline, flower market, shopping, terrace restaurants and fabulous cultural attractions.  Nice is home to a very impressive Roman amphitheater, and the city still has it’s old medevil old town, with narrow streets, red tile terraced roofs housing restaurants, boutiques, and food shops.  At the very center and heart of Nice is the Promenade des Anglais, which is  a long road running the length of the seafront in Nice.  It is lined with cafes and lovely luxury hotels, posh apartments, museums, and is popular for runners, cyclists and  walkers.  Nice Carnival is a fabulous and world-famous Nice festival which ends with Mardi Gras, and has parades along the Promenade des Anglais and in the Place Massena.  The

Flower Market is world renowned.  The Matisse Museum sits on a hill in Cimiez and houses a collection of the artist’s works left the the artist to the city of Nice, which is where he lived from for almost 40 years.

Where to Stay in Nice, France

Many of the grander and older hotels on the Promenade des Anglais were built at the turn of the century.  The grandest is thought to be the Negresco, which is a national monument, has luxurious rooms individually decorated in styles inspired by the noted periods of French history and art. The Le Meridien Nice sits in a perfect site in the heart of the city, and faces the sea. The Palais Med is a legendary Art Deco hotel from the 1930’s and is filled with fascinating delights.

To arrange your private jet charter flight to and from Nice, France: