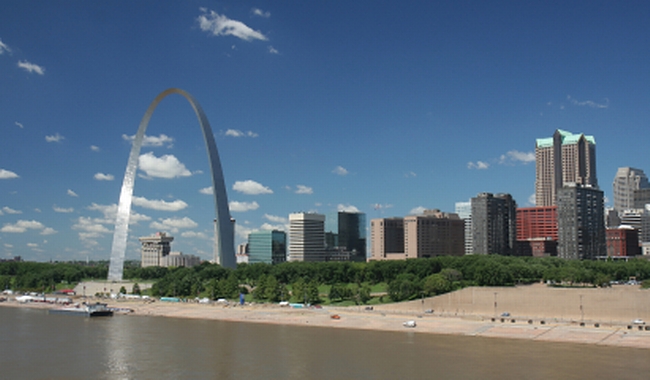 Newport Jets is your premiere St. Louis, Missouri charter jet company, providing private jet charter flights in and out of St. Louis. The company’s private jet travel team is available now to arrange your local St. Louis jet charter service. Our experienced and professional concierge team will not only handle your jet charter flight, but will plan your ground transportation, and recommend first class St. Louis hotel accommodations. Newport Jets has a wide variety of St. Louis private jets to choose from, including the excellent Gulfstream G550 to the Learjet 31, the company has the perfect private jet aircraft for each and every trip. To make your stay in St. Louis comfortable and luxurious we’ve provided some local information on hotels, private jet airports and popular attractions. We are also pleased to tell you our charter jet team specializes in booking jet charter flights to and from St. Louis, Las Vegas, New York, Los Angeles, and Orlando – as well as hundreds of other domestic and international destinations.

St. Louis:  The Gateway to the West

St. Louis, Missouri is located on the Mississippi River and known as “The Gateway to the West”, as it was once the last major stop for pioneers traveling west.  The city has a wonderful, rich history. In 1904 the city hosted the World’s Fair and the Summer Olympics, with most of the city’s significant homes, parks and buildings built during that time period. St. Louis is known for the St. Louis Arch and the St. Louis Cardinals major league baseball team. The city features great restaurants, shopping, vibrant nightlife, and 5 major sports teams. The Gateway Arch was designed by Eero Saarinen, and is the world’s tallest national monument.  The arch, the icon of the city, was created and designed as a symbol of the gateway to the West, and is located in the Jefferson Expansion National Memorial Park. On your visit to St. Louis you won’t want to miss the many museums and cultural attractions including the Contemporary Art Museum St. Louis, City Museum, Museum of Westward Expansion, Mildred Lane Kemper Art Museum, and the Missouri Botanical Garden, and many more.

Places to Stay in St. Louis

To arrange your private jet charter flight to and from St. Louis, Missouri: